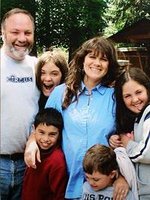 August 18 Gavin Coffee, a 43-year-old father of 4 was tragically killed in a car accident on Interstate 5 in Seattle. Brian Campbell was driving in front of Coffee when allegedly his unsecured load in the back of his pickup truck flew backward causing a chain-reaction car crash. Coffee’s vehicle swerved in order to miss the falling debris and his car was T-boned by a Lincoln Town Car, probably killing him instantly.

Gavin and his wife Heidi are devout Christians and members of Seattle’s City Calvary Chapel. Gavin volunteered and worked with the church’s youth. In fact, he was on his cell phone talking with his pastor, John Aydelott, when he suddenly said into the phone, “Whoa! Whoa!” Then came the sound of metal crunching. Pastor John overheard the car crash and Gavin’s death.

About losing her husband Heidi said, “I don’t have any regrets. We expressed how much we loved each other. We lived life to the fullest that we could.” God’s peace was so powerful and prevalent in Heidi, who is pregnant with their fifth child, that she instantly offered forgiveness to Campbell. She said, I don’t want the man “to be blaming himself all his life” for the crash. “It was one of those freaky things that happened.”

What’s more, Heidi contacted Campbell and invited him to attend the memorial service.

I’ve been a Christian for several years and though I’ve seen God’s power bring forgiveness and peace many times I’m always in awe of God’s gracious work in our lives.

Heidi will still have grief and sorrow over her loss. She will still have tremendous challenges raising her four children. Giving birth to her fifth without Gavin at her side will be bittersweet. But God’s power is real and Heidi gives every indication that she will continue to lean into Him and find the grace she will need to face the challenges of each day.
Posted by Scott Brewer at 11:30 PM