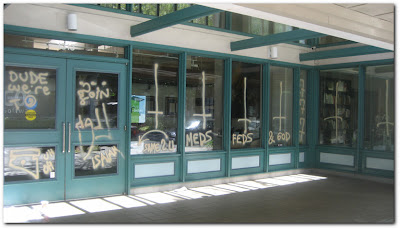 One of the great tools I enjoy is Bible software. For years now I have used Logos software. With a key stroke I can view 6 translations of a biblical text, or check out the Hebrew or Greek words that have been rendered into English, or compare thoughts of several commentators. What used to require a table with 10 books spread all over and a yellow pad I now have in my laptop.

Since I’m on the mailing list for Logos I discovered this morning that they had been vandalized over the weekend. According to the Seattle PI a man had painted Satanic and Nazi symbols all over the building, had replaced regular light bulbs with red ones and had created disturbing drawings and writings throughout the building.

Dale Sadler, 34, was arrested and confessed to the vandalism claiming that Logos should be making all of their materials available to people for free since it was the Bible.

Logos concluded their broadcast email to their customer base with a request for prayer confessing that the whole ordeal had been disturbing to all.

I receive dozens of communications a day from those known to me and not and the greater percentage of them contain some reference to or request for prayer. I believe in prayer and practice prayer and have seen many answered prayers. However, with such a great number of prayer requests, one that comes from a business will often be glossed over. But this one stood out to me.

Several years ago I was serving another church in another state. I arrived at my office one morning to find that someone had thrown a concrete block through my window, entered our offices and vandalized our sacred work space. It was very upsetting to look at all of the damage and then begin the process of cleaning up. After I had given a report to the police I turned to my staff that were all visibly shaken and asked them to join me in praying. I led us in praying for the person who had violated our offices. It seemed to me that anyone who would break in to a church office must have a lot of brokenness in his life.

About 10 years later I was living in Redmond, Washington and serving Meadowbrook Church. I received a phone call from the woman who had been my secretary years before in the other church. She said that the man who had broken into our offices had stopped by on the previous day and asked for forgiveness from the church for his break in. He shared some of his story. He was living a very troubled life at the time with a lot of confusion and anger. Sometime after vandalizing our office he was arrested for another crime and spent several years in prison. In prison he was introduced to Christ, became a Christian and was now going back to people and places that he had wronged in the attempt to make restitution.

My former secretary commented, “I thought you were crazy that morning when you asked us to pray for the person who had violated our office. Part of me knew you were right but I was so upset and angry I didn’t want to. Now to see how God answered that prayer I’m left in awe of God’s ability to change a life and to answer a prayer.”

I’m praying for Logos today, and for Dale Sadler.
Posted by Scott Brewer at 9:08 AM

I wanted to thank you for your prayers for Logos and for Dale Sadler - the man guilty of vandalizing the Logos building.
Dale is my brother - and I have been praying for him for years. As I am a christian, I find it disturbing that anybody would do something like this - but it makes me sick to my stomach to think that it would be my own brother. Dale has battled drug and alcohol addiction since he was a teenager - and I have prayed for him for years. Dale has also struggled with christianity - when he completed drug rehab, he had turned to God and had made a full recovery - that lasted for two years. I continue to pray for him every day - and I believe in the power of prayer - I also know that God gives us free will - and that he is the only person that can help himself. I am certain that he was high on drugs when he defaced the Logos building - I received a message from my brother a couple of days after this incident that said:

are being shut down for perpetuating hatred and breaking up families."

The only thing perpetuating hatred in my brother and breaking up my family is my brother himself and his drug addiction. It breaks my heart - and my parents hearts - to see my brother ruining his life and inflicting hatred in the lives of others - particularly christians. Again, I thank you for your prayers.

Thanks for checking in and leaving a little more of your story and that of your brother.

Since I look at my Logos software almost every day I'm asking God to prompt me to pray for Dale every time I open the program.

You and your family are now on my heart also and I'm praying for God to touch your heartache as well as give you hope for the future concerning Dale.

It's Dale and it's been over 4 years since the 'Logos' stunt.
I can't make excuses for what I did that day to the Logos offices. It was very immature and mean-spirited. I am not a satanist or a nazi, I was just going for maximum shock value. I was abusing methamphetamine and was so high that I actually thought that what I was doing was a noble thing, believe it or not. Well anways I want to thank you both for your prayers. My meth use did break up my family. I no longer use methamphetamines and am now working to help others. My relationship with my parents has been fully restored, and I have mde a full recovery once again. I truly believe that God has shown me the way out of the mess I was living in. My brother Dan and I do not speak at all anymore, other than the occasional email message... perhanps he has not forgiven me, and I can't blame him. I used drugs for many many years and was not a very good big brother.. Anyways, Scott thanks again for your kind words and your prayers. This link http://blog.logos.com/2007/07/froot_loops_free_bibles/ shows my reply for what I did that day in the comments at the bottom of the blog. . .I was not very clear-headed when I wrote it but it explains what my state of mind was regarding the vandalism....It most definitely was NOT anti-christian. God Bless You and if you are still thinking about me every time you open the LOGOS software, (LOL) maybe you could send out a quick prayer for two distant brothers to re connect.

Dale, truly a surprise to hear from you. I'm grateful to hear you accept responsibility for what you did, that you're drug free and taking steps at amends and reconciliation.

And, I will pray for you and Dan and others that have been hurt that God's grace will heal and build relational bridges to one another.